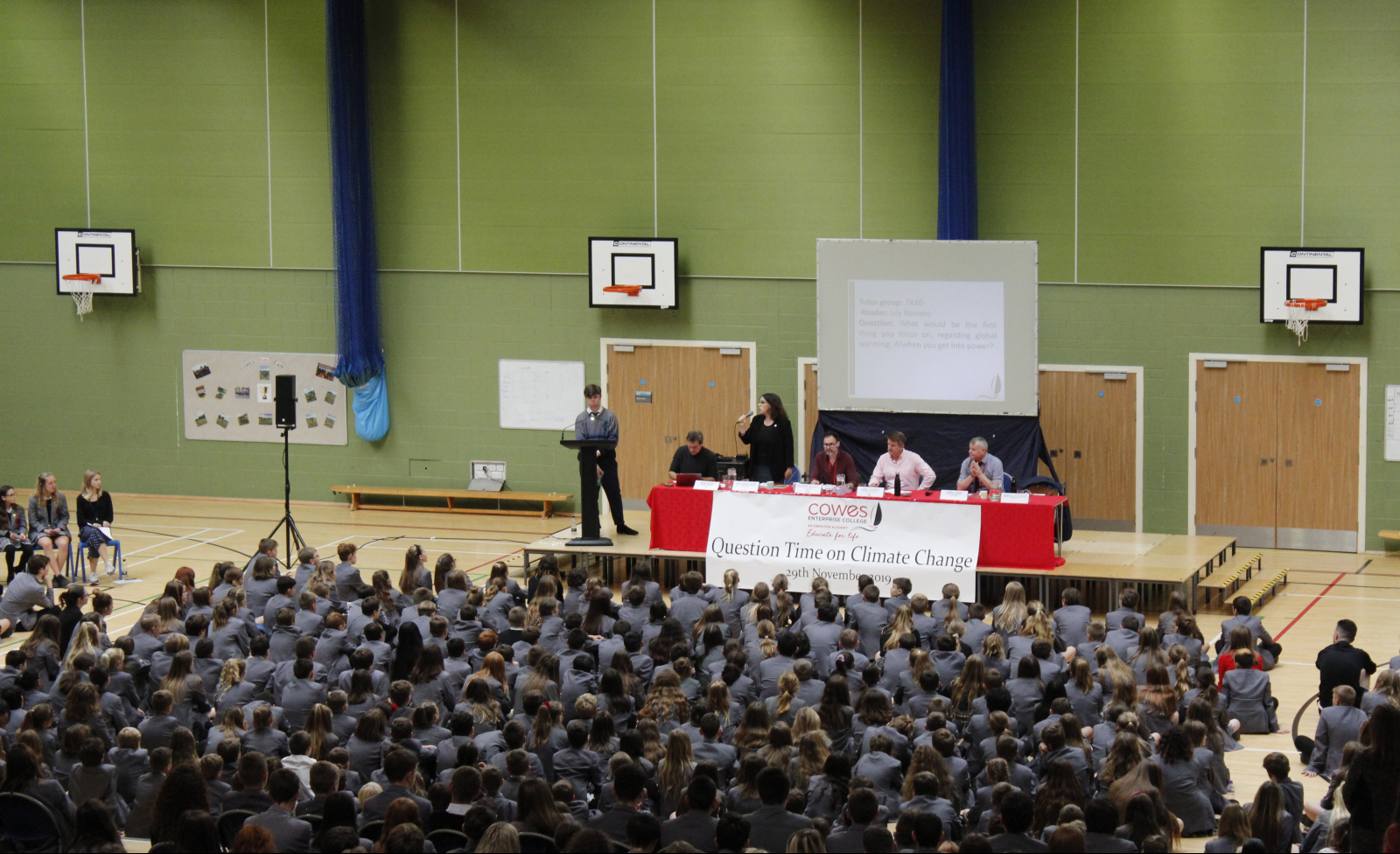 With the General Election taking place this Thursday, it’s really positive to see some of our schools embracing the world of politics and getting involved with election hustings, as well as running their own elections to see if their results will differ from the rest of the UK.

Students and staff at Cowes Enterprise College welcomed local general election candidates for a student-led Question Time for Climate Change event. The hustings event took place in front of the school’s entire population of over 1,200 students and questions included: “How can we help you and how can you work with us to achieve a more sustainable future for the Isle of Wight?” and “What would be the first thing you focus on, regarding global warming, if you get into power?”

Every moment of the event was run by students in the sixth form and Bob Seely, Conservative prospective parliamentary candidate for the Isle of Wight, commented that it was the best hustings event he had been to in his career, whilst the school enjoyed positive feedback from other delegates.

Cowes Enterprise College has long prioritised encouraging students to ‘be the change they want to see’ and play an active role in making their voices heard. The school is taking part in the ‘Global Strike 4 Future’ and earlier this year marked the international climate change protest day with a day of student-led social action. Special lesson time was devoted to learning more about the democratic process, whilst an ‘Eco Council’ conference was held to enable students to put together a plan of action and write letters to politicians.

Rachel Kitley, Principal at Cowes Enterprise College, said: “Hosting our own Question Time event, centred solely on the crucial issue of climate change, was a great way for our students to recognise how important their voices are. It was hugely encouraging to see them so actively involved in the political process and hear from the candidates about how impressed they were with their efforts.

“We look forward to continuing to support our students to demonstrate their keen social and political awareness with similar student-led initiatives in the future.”

At the City of Norwich School, they held an election hustings late last month and students in Years 13 and 12 had a chance to put their question to Norwich South’s candidates, with a two-minute limit for answers, before closing remarks from each candidate.

Matt Sprake, deputy Headteacher and Head of Sixth Form, said: “Our students have high expectations of their MPs and are always keen to explore the ways in which they can work in partnership for the benefit of their communities.”

Sixth formers at Ormiston Bushfield Academy held an election special Question Time, with students taking on the role of party leaders, delivering speeches and answering some gruelling questions from an audience of Year 12 and 13 students. The debate chairs kept proceedings very much in order throughout the event.

On Thursday, Flegg High Ormiston Academy will run its own polling station to compare the voting behaviours of its students to the rest of the country, and we look forward to seeing the final results post-election day.

It is hugely promising to see our students getting involved with politics – ultimately, they have a part to play in shaping our political landscape and the future. We know our young people like to speak up for what they believe in, get involved and have their voices heard.

As a Trust, we encourage these opportunities and during the summer established an OAT National Student Voice Council. We have also launched a three-year programme which will support our schools to develop provision with professionally-led Teacher CPD, oracy training for up to 2,700 pupils, debate club setup and national debate competitions. For more information, contact Enrichment Manager, Jemima Waltho.