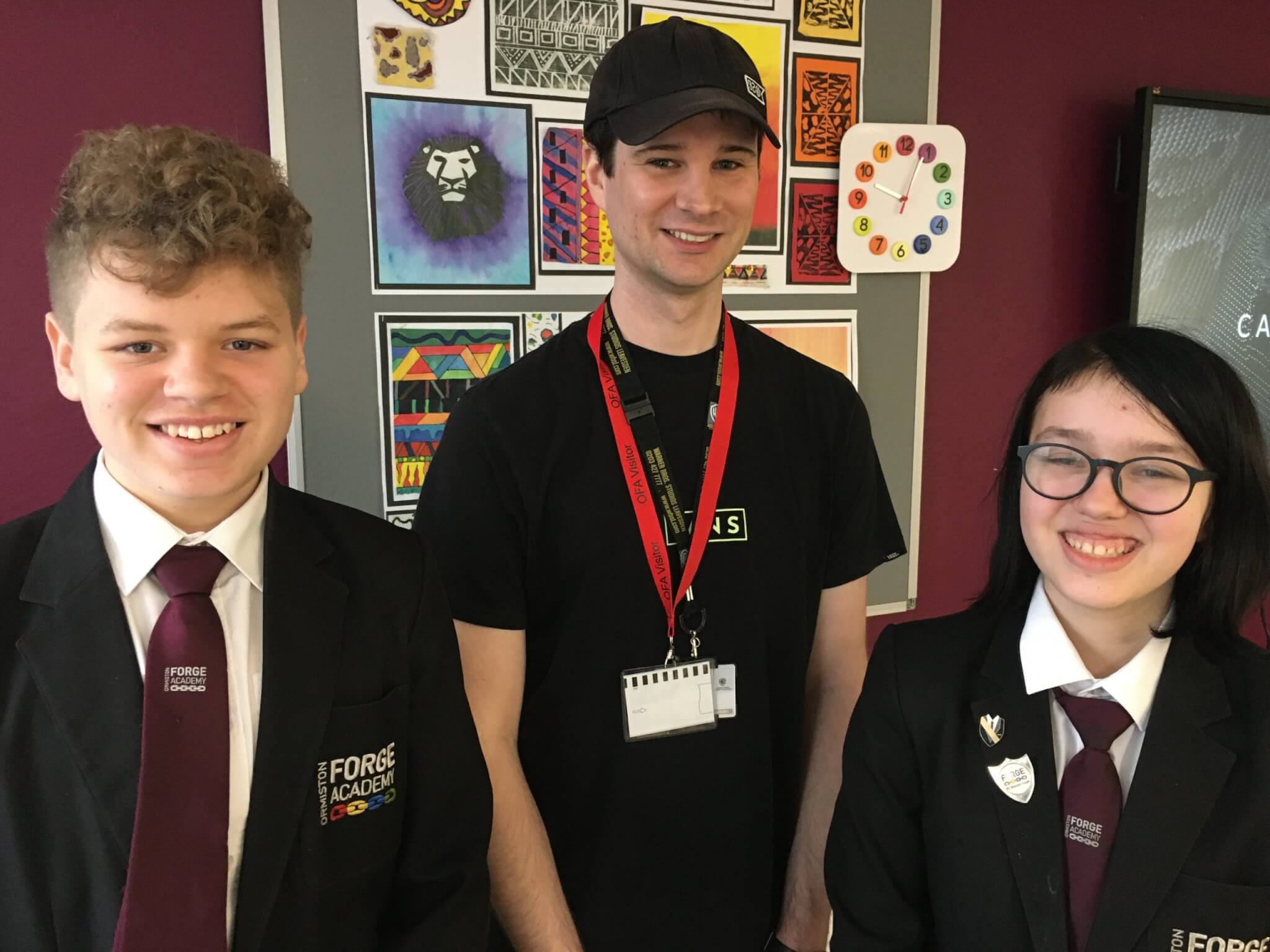 Matthew is pictured with Thomas and Bethany, both talented art students who asked lots of questions and were greatly inspired by the talk.
FacebookTweetLinkedInPin

Matthew Hill, former student of Ormiston Forge Academy, works in the film industry as a concept designer. He talked to students in year 9 and year 10 about his career and working on Netflix productions and films The Batman, Mission Impossible 7, and his current work on Mission Impossible 8. Matthew also held a workshop with students where they explored the many varied career routes through art.

Matthew studied A-levels in a mix of science and art-based subjects and after two years of study, he followed his passion to study fine art at Birmingham City University. Art was always Matthew’s favourite subject at school and after graduating from university, no matter what job he did, he always worked on his own art projects in his spare time.

Matthew was the first person from his family to go to university and having no connections in the London film industry, there was definitely an element of being in the right place at the right time that helped him on the way. In 2018 Matthew’s work caught the attention of an art director at Warner Brothers Film Studios in London. He was offered the opportunity to work as a concept artist on a new WB film starring Mark Walberg.

Emma Porter, head of art at Forge, said: “Matt provides the line of sight into industry that our students need. He’s worked incredibly hard to get where he is now and it’s an important lesson for many of our talented art students.

“Matt’s warm approach removed barriers from an industry that for many is an impossible dream. I’ve been delighted with the response from students who have found another gear in their work. The impact people like Matt have in the classroom is immeasurable and we are incredibly grateful for his time and friendship.”

Matthew is also featured on OAT Futures. OAT Futures is part of OAT, a website to support every OAT student to make well-informed and aspirational choices for their future. With funding from the Careers and Enterprise Company they have been able to commission the development of this new careers portal which can be found at www.oatfutures.co.uk.

Matthew said, “I really enjoyed visiting my old school and it was good to look back on my education and career, and tell the students that when it comes to making a decision about your future, it is best to choose something that you enjoy.

“When looking at art specifically, some people would argue that there are few viable career paths available for art students; this could not be further from the truth and evidence of this can be seen all around us, in the forms of architecture, vehicle design, advertising, fashion, video games, TV, movies and many more.”