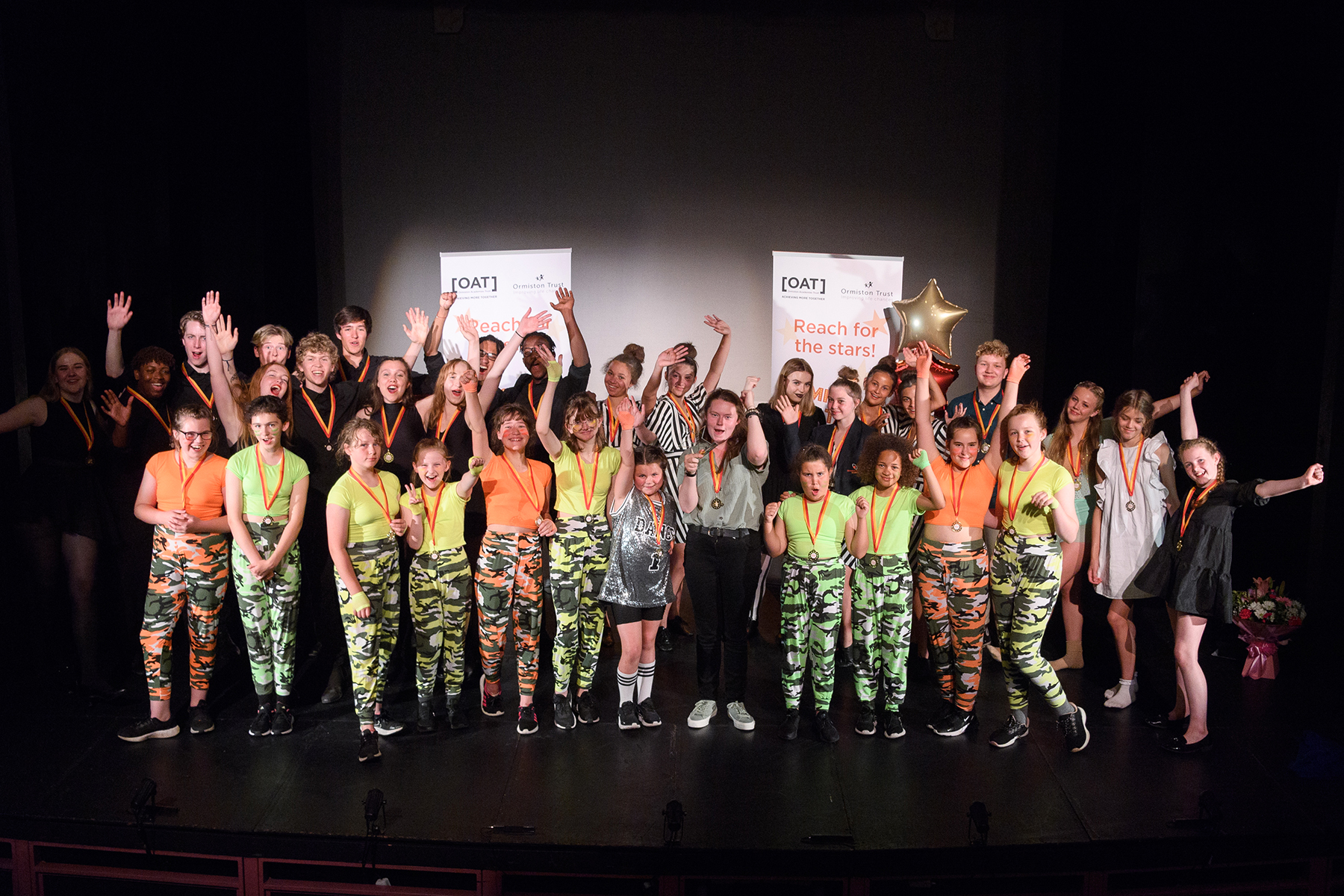 Year 10 Flegg High Ormiston Academy student Hannah Reeve has been crowned the winner of talent competition “Ormiston’s Got Talent (OGT)”, which saw contestants from across OAT schools compete for gold.

This was the first ever trust-wide talent show at The Old Rep Theatre in Birmingham city centre and was launched back in December 2021 by inviting all academies within the Trust the opportunity to submit three winning entries which would be performed and recorded by pupils showcasing their talents whatever this may be dance, drama, music, singing or something else entirely. The aim was to nurture and celebrate talent from across the academies and raise the profile of performing arts across the Trust.

The competition was open to all, and academies were encouraged to get as many pupils to participate as possible. Of all those who competed, eight acts were shortlisted, and announced at the OAT Annual Awards Ceremony in March. They were then invited to take part in the final OGT showcase in July.

Each performer was invited to perform two, three-minute performances in front of a live audience of judges, staff and family members. There was a wide age range of performers from Year 4 up to Year 13, and also a wide range of performances from rhythmic gymnastics to singing, performing arts, a boys’ choir and dance acts. The final event performances took place over two and a half hours and judges were invited to discuss and conclude their views and judgments on the day.

Flegg High student Hannah Reeve was crowned the winner after her performance of “See, I’m smiling” followed by her second act “Skyfall”. Hannah’s version of ‘See, I’m smiling’ had the crowd in tears, it was a truly powerful, heartfelt performance.

The day was concluded with an awards ceremony during which Hannah received an engraved winner’s trophy and the OAT Performs shield to display in Flegg High Ormiston Academy for the next year.

Debbie Reeve, Hannah’s mother said: “To say we are proud of Hannah for winning is an underestimate – we are so pleased for her.  There were some amazing acts and we really thought it could have gone any way.

“However, even though Hannah won, I know the whole day and experience for her is what she really enjoyed most.  Hannah loves performing, but she loves being part of “Performing Family” even more and that was what she spoke about most about yesterday.  How everyone supported each other, and the warmth of that shared experience resulted in her just enjoying every minute.  It will be a day we will always remember!”

Jane Bennett, principal at Flegg High Ormiston Academy said: “We are delighted for Hannah, and this achievement is incredibly well-deserved. She has a real talent, and I can’t wait to see where it takes her.

“The talent competition was a fantastic opportunity for pupils across Ormiston Academies Trust to come together, showcase their skills and get to know each other, and we look forward to many more events to come.”

This event was made possible thanks to support and funding from Ormiston Trust.